The largest known member of the Dromaeosaurid clade, the famous "raptor" Theropods, Utahraptor was massive compared to its relatives, with a mass of nearly 500 kg; Similar size to that of modern Polar Bears. Utahraptor lived during the Early Cretaceous, North America. As you may guess by its name, it was found in Utah.

Utahraptor is a Dromaeosaurid Dinosaur with a Carnivorous Diet. It is a very popular Dinosaur, being one of the most well known and played Dinosaurs in Dinosaur Arcade. Its status in Pop Culture and its stats contribute to the popularity of the Utahraptor. Despite its general stats, it can jump higher and has more energy than most creatures.

The Utahraptor is covered entirely with thick Feathers, but parts of the body such as the legs, fingers, and some of the head are not covered. The tail has long, thin feathers which extend out toward the end of the tail. A primary feature of the Utahraptor are its two long toe claws, which are the toes closest to the center of the body.

The Default Pattern is the Base Model for Utahraptor, being freely selectable.

This Pattern has stripes across the upper part of the body, covering the entirety of the back, extending from the neck area to the start of the tail. The outer tail feathers are covered by stripes, with large stripes covering the middle of each feather piece and thin stripes outlining each.

The Utahraptor was revealed on June 27th, 2021, along with the Corythosaurus.[2]

Featherless Utahraptor is a skin for Utahraptor, being obtained by opening a Purple Crate. It is a Utahraptor that lacks the feathers, which cover a majority of the Default Utahraptor.

The model for Featherless Utahraptor has the same general appearance as the Default Utahraptor, but with a more slender body due to the lack of feathers.

The Default Pattern is the Base Model for Featherless Utahraptor, being freely selectable.

This Pattern has stripes across the upper part of the body, covering an area very similar to that of the Default Utahraptor pattern.

The Draped Pattern is freely selectable.

The Movie Pattern is obtained by opening a Blue Crate.

This Pattern primarily has a single streak across the sides of the body, extending from teh eye to the middle of the tail. The streak is outlined by a different layer.

The Featherless Utahraptor was first revealed on March 27th, 2021.[4] 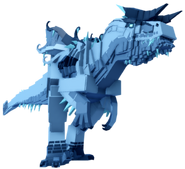 FrostImp is a Skin for Utahraptor, being obtained by opening a Christmas Crate.

The Default Pattern is the Base Model for FrostImp Utahraptor, being freely selectable.

The FrostImp was first revealed as an Emote in a teaser before the release of Version 0.3.71, with the Emote being included in the update.[5]

Community content is available under CC-BY-SA unless otherwise noted.
Advertisement